Disney has revealed details about a slate of series heading to its streaming service Disney+ produced by its live-action and animation studios, including the first longform series made by Pixar.

The series were discussed during the D23 Expo 2022 at the Anaheim Convention Center in California over the weekend, where thousands of fans gathered to hear the announcements and plans for Disney Live Action, Pixar and Walt Disney Animation Studios.

As well as a host of films that will be made available to stream on Disney+, such as Hocus Pocus 2, Disenchanted, Peter & Wendy, the audience was given a closer look at Pixar’s first-ever longform series, which will stream on Disney+ in fall 2023.

Win or Lose follows a co-ed middle school softball team in the week leading up to their championship game. Each episode takes place that same week, highlighting the perspective of a different main character – players, their parents, the umpire – each reflected in a unique visual style.

Elsewhere, Lee discussed the opportunities Disney+ has created at Disney Animation, reviewing the slate of shows heading to the streamer, including shortform series such as Zootopia+, which launches on November 9.

Coming to Disney+ in 2023 is Iwájú, a longform series created in collaboration with pan-African comic book entertainment company Kugali. 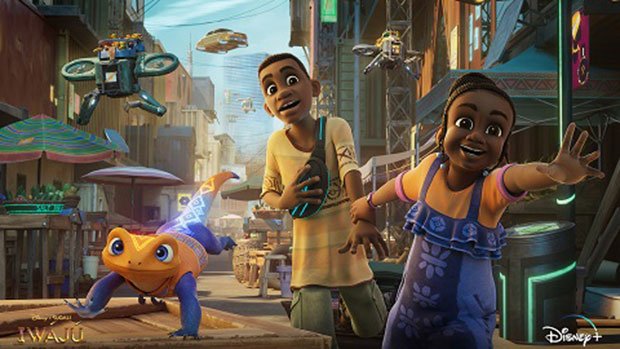 Longform toon Iwájú is a collaboration with entertainment company Kugali

Lee invited to the stage Kugali filmmakers Olufikayo Ziki Adeola, Hamid Ibrahim and Tolu Olowofoyeku, who introduced the series, which is a love letter to Lagos, Nigeria.

Olowofoyeku and Ibrahim described the world of Iwájú as a futuristic depiction – a world bursting with colour, unique visual elements and technological advancements inspired by the spirit of Lagos, which is physically divided into an island and a mainland separated by both water and socio-economic status.
The coming-of-age story introduces a young heiress from the wealthy island and her best friend, a self-taught tech expert and loving son from the mainland.

Among the titles discussed by Davis during the session were Disney+ series American Born Chinese, which will launch in 2023 and is based on the genre-hopping graphic novel by Gene Luen Yang.

The series tells the story of an average teenager juggling his high school social life with his home life. When he meets a new student on the first day of the school year, even more worlds collide as he is unwittingly entangled in a battle between Chinese mythological gods.

Set during the High Republic era, the series will follow a group of Younglings as they embark on missions where they help people in need, discover exotic creatures, clash with villainous pirates, train with their masters and, ultimately, learn the valuable skills needed to become Jedi: compassion, self-discipline, teamwork, patience and friendship.

“At Disney Branded Television, we create shows full of magic, adventure, thrill and heart that resonate with audiences around the world,” said Disney Branded Television president Ayo Davis. “Our announcements today spotlight the breadth and depth of our commitment to entertaining fans of all ages, across animation, live-action series and movies, unscripted and documentaries.”

Business and Finance
We use cookies on our website to give you the most relevant experience by remembering your preferences and repeat visits. By clicking “Accept All”, you consent to the use of ALL the cookies. However, you may visit "Cookie Settings" to provide a controlled consent.
Cookie SettingsAccept All
Manage consent