BBC One has suspended its regular programming schedule in the wake of the Queen’s death.

The broadcaster is airing rolling news coverage on Friday with a BBC News Special filling regular TV slots in between BBC News at One and BBC News at Six.

Programmes including EastEnders, Homes Under The Hammer, Bargain Hunt, and Doctors have moved from their usual channel and will air on BBC Two throughout the day.

Similarly, the new BBC Two programming schedule includes the additions of Animal Park, Best Bakes Ever, Money For Nothing, Garden Rescue and The Bidding Room.

On Thursday, BBC One interrupted Bargain Hunt at 12.39pm to deliver the statement from Buckingham Palace which said royal doctors were concerned for the Queen’s health.

Six hours later, after an image of the flag at Buckingham Palace was shown at half mast, presenter Huw Edwards told viewers: ‘A few moments ago Buckingham Palace announced the death of Her Majesty Queen Elizabeth II.’ 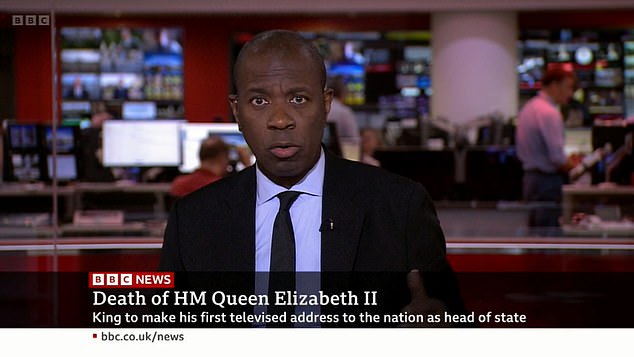 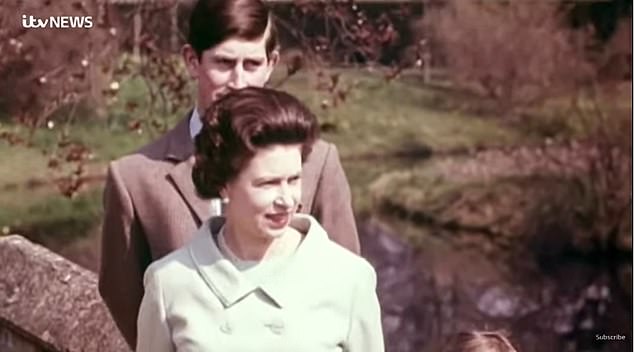 Edwards then read out the statement from the Palace while dressed in a dark suit, white shirt and black tie, in line with the BBC’s dress code for when a member of the royal family dies as a mark of respect.

This morning the Today programme on BBC Radio 4 extended by an hour, with its regular three-hour slot increased to four.

Radio 4 also had a Woman’s Hour special at 10am following the death of Her Majesty the Queen Elizabeth II which discussed the Queen as a woman and her coverage in the media. 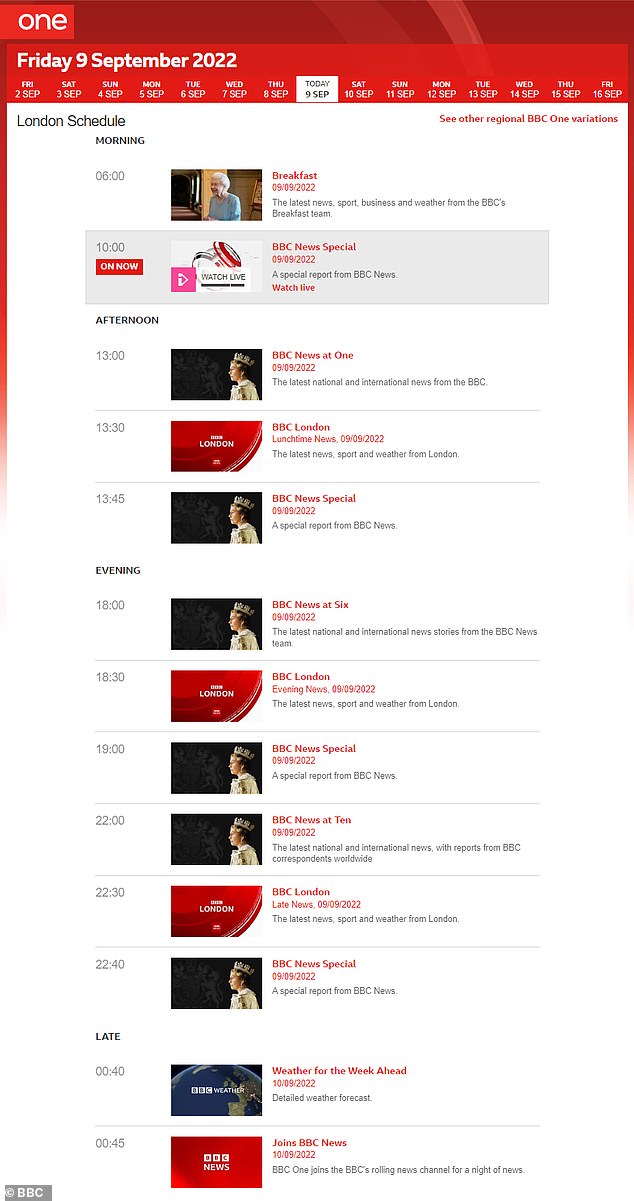 At 11am R4’s regular programming has been replaced by a special tribute to the Queen, called The Queen Remembered, presented by James Naughtie.

Following the death of the Queen, ITV also made scheduling changes.

The broadcaster showed continuous news coverage through the night which looked back at the Queen’s life and her reign, including her decades of service to the country.

Good Morning Britain, hosted by Susanna Reid and Ben Shephard, aired until 9am on Friday.

Reid said: ‘It is quite a moment, we knew this moment was coming and yet it is still a shock. Only those over 70 years old have known any other monarch and now we will all know another one.

‘The longest reign of any monarch, the most constant presence in all of our lives, she was the steady presence as Queen while everything else changed over the decades.

‘Dignified, dutiful, devoted to our country, to the commonwealth, to her family, and to a life of service which has been both reassuring, comforting, but also inspiring.

‘I was reflecting yesterday, we knew that she couldn’t be immortal and yet I think we all hoped she might be. It is quite a moment, I think it will take time for it to sink in.’ 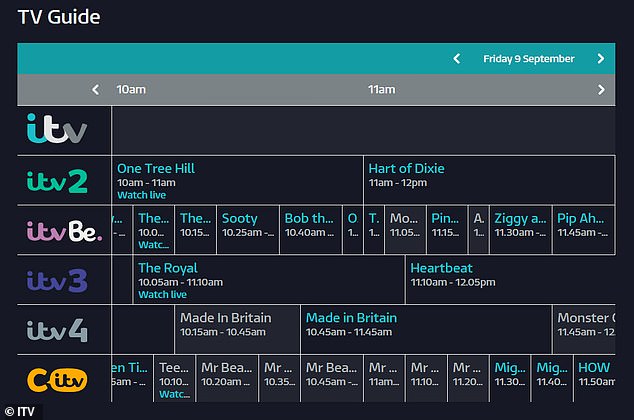 It was followed by an extended ITV News special programme which will be presented by Mary Nightingale and Tom Bradby throughout the day.

The pair will be joined by special guests reflecting on the Queen’s ‘majesty and legacy’, ITV have said.

Another programme airing at 8.30pm called Queen Elizabeth II – The Longest Reign, will be presented by Jonathan Dimbleby, followed by an extended hour-long ITV News At Ten bulletin presented by Julie Etchingham.

All TV anchors across channels were dressed in black on Friday as a mark of respect.